The Burst Alert Telescope (BAT) is a highly sensitive, large FOV instrument designed to provide critical GRB triggers and 4-arcmin positions. It is a coded aperture imaging instrument with a 1.4 steradian field-of-view (half coded). The energy range is 15-150 keV for imaging with a non-coded response up to 500 keV. Within several seconds of detecting a burst, the BAT calculates an initial position, decides whether the burst merits a spacecraft slew and, if so, sends the position to the spacecraft.

In order to study bursts with a variety of intensities, durations, and temporal structures, the BAT must have a large dynamic range and trigger capabilities. The BAT uses a two-dimensional coded aperture mask and a large area solid state detector array to detect weak bursts, and has a large FOV to detect a good fraction of bright bursts. Since the BAT coded aperture FOV always includes the XRT and UVOT fields-of-view, long duration gamma-ray emission from the burst can be studied simultaneously with the X-ray and UV/optical emission. The data from the BAT can also produce a sensitive hard X-ray all-sky survey over the course of Swift's two year mission. Below is a cut-away drawing of the BAT, and a table listing the BAT's parameters. Further information on the BAT is given by Barthelmy (2000; 2005). 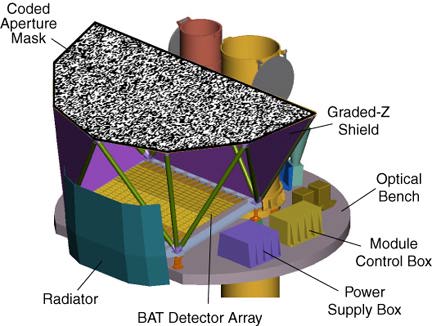 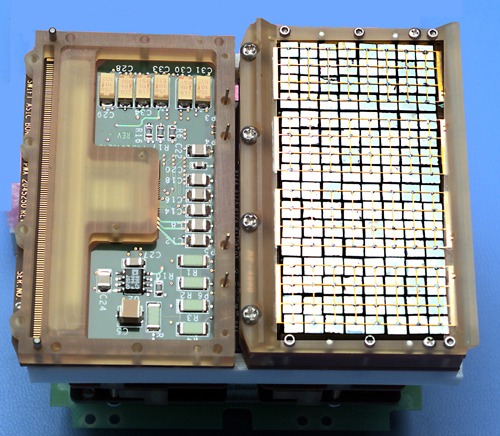 The BAT's 32,768 pieces of 4 x 4 x 2 mm CdZnTe (CZT) form a 1.2 x 0.6 m sensitive area in the detector plane. Groups of 128 detector elements are assembled into 8 x 16 arrays, each connected to 128-channel readout Application Specific Integrated Circuits (ASICs). Detector modules, each containing two such arrays, are further grouped by eights into blocks. This hierarchical structure, along with the forgiving nature of the coded aperture technique, means that the BAT can tolerate the loss of individual pixels, individual detector modules, and even whole blocks without losing the ability to detect bursts and determine locations. The CZT array has a nominal operating temperature of 20 degrees C, and its thermal gradients (temporal and spatial) are kept to within ±1° C. The typical bias voltage is -200 V, with a maximum of -300 V. 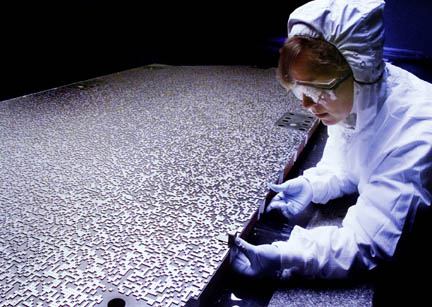 A figure-of-merit (FOM) algorithm resides within the BAT flight software and decides if a burst detected by the BAT is worth requesting a slew maneuver by the spacecraft. If the new burst has more "merit" than the pre-programmed observations, a slew request is sent to the spacecraft. Uploaded, rapid-reaction positions are processed exactly the same as events discovered by the BAT. The FOM is implemented entirely in software and can be changed either by adjusting the parameters of the current criteria or by adding new criteria.

The BAT runs in two modes: burst mode, which produces burst positions, and survey mode, which produces hard X-ray survey data. In the survey mode the instrument collects count-rate data in five-minute time bins for 80 energy intervals. When a burst occurs it switches into a photon-by-photon mode with a ring-buffer to save pre-burst information.

The burst trigger algorithm looks for excesses in the detector count rate above expected background and constant sources. It is based on algorithms developed for the HETE-2 GRB observatory, upgraded based on HETE-2 experience. The algorithm continuously applies a large number of criteria that specify the pre-burst background intervals, the order of the extrapolation of the background rate, the duration of the burst emission test interval, the region of the detector plane illuminated, and the energy range. The BAT processor continuously tracks hundreds of these criteria sets simultaneously. The table of criteria can be adjusted. The burst trigger threshold is commandable, ranging from 4 to 11 sigma above background noise with a typical value of 8 sigma. A key feature of the BAT instrument for burst detection is its imaging capability. Following the burst trigger, the on-board software checks for and requires that the trigger corresponds to a point source, thereby eliminating many sources of background such as magnetospheric particle events and flickering in bright galactic sources. Time-stamping of events within the BAT has a relative accuracy of 100 microsec and an absolute accuracy from the spacecraft clock of ∼200 microsec. When a burst is detected, the sky location and intensity are immediately sent to the ground and distributed to the community through the Gamma-Ray Burst Coordinates Network (GCN) (Barthelmy et al. 2000).

Above is an example of the response of the BAT to a simulated GRB. This shows a moderately difficult case: a GRB near the BATSE threshold (0.3 count s-1 cm-2 in the 50-300 keV band) in crowded field (point sources and diffuse+internal background total 25x and 10x GRB count rate, respectively). When the count rate in the entire detector plane increases by a significant amount, the background-subtracted count rates in the individual detectors are processed by a fast (but low resolution) algorithm to produce an image of the entire FOV. The region of this coarse image containing the brightest source (i, top middle) is selected for detailed imaging. This high-resolution imaging uses an algorithm that is slower but more accurate than the full-field algorithm. The image that results (ii, top right) gives an accurate location for the GRB.

If there is no background subtraction, the resulting image will contain bright steady sources that can be confused with the transient. Images iii and iv (bottom middle and right) show that, in this simulation, the GRB is still detectable in the coarse and fine images, even though the steady sources are much brighter.

While searching for bursts, the BAT performs an all-sky hard X-ray survey and monitors for hard X-ray transients. The BAT accumulates detector plane maps every five minutes, which are included in the normal spacecraft telemetry stream. Sky images are searched to detect and position sources. The 5-sigma sensitivity of the survey is about 0.8 mCrab in the 15-150 keV band for 2 years. For regions where there are perpetually numerous strong sources in the BAT FOV (i.e. the Galactic Center), the limiting sensitivity will be about 50% greater.

For on-board transient detection, one-minute and five-minute detector plane count-rate maps and ∼30-minute long average maps are accumulated in four energy bandpasses. Sources found in these images are compared against an on-board catalog of sources. Those sources either not listed in the catalog or showing large variability are deemed transients. A subclass of long, smooth GRBs that are not detected by the burst trigger algorithm may be detected with this process. All hard X-ray transients are distributed to the world community through the internet, just like the bursts.

A typical spectrum of the 60 keV gamma-ray line from an 241Am radioactive source for an individual pixel is shown in the figure below. It has a full-width-half maximum (FWHM) at 60 keV of 3.3 keV (dE/E = 5%), which is typical of CZT detectors. The actual threshold varies between about 10 keV and 18 keV from detector to detector. The average BAT background event rate is 10,000 events s-1 (or about 0.3 count s-1 per detector), with orbital variations of a factor of two around this value. This yields a GRB fluence sensitivity of ∼10-8 erg cm-2 s-1 (15-150 keV). 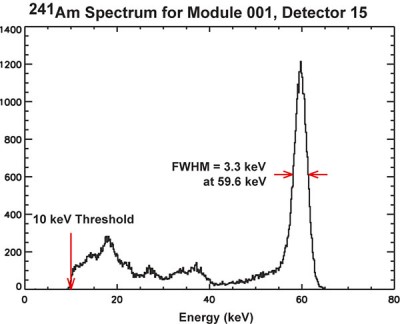 The combination of the 4 mm square CZT pieces, plus the 5 mm square mask cells and the 1 m detector-to-mask separation gives an instrumental angular resolution of 20 arcmin FWHM, yielding a conservative 4 arcmin centroiding capability for bursts and steady-state sources given an 8 sigma burst threshold.