Gamma-ray bursts (GRBs) are the most powerful explosions the Universe has seen since the Big Bang. They occur approximately once per day and are brief, but intense, flashes of gamma radiation. They come from all different directions of the sky and last from a few milliseconds to a few hundred seconds. So far scientists do not know what causes them. Do they signal the birth of a black hole in a massive stellar explosion? Are they the product of the collision of two neutron stars? Or is it some other exotic phenomenon that causes these bursts?

With Swift, a NASA mission with international participation, scientists have a tool dedicated to answering these questions and solving the gamma-ray burst mystery. Its three instruments give scientists the ability to scrutinize gamma-ray bursts like never before. Within seconds of detecting a burst, Swift relays its location to ground stations, allowing both ground-based and space-based telescopes around the world the opportunity to observe the burst's afterglow. Swift is part of NASA's medium explorer (MIDEX) program and was launched into a low-Earth orbit on a Delta 7320 rocket on November 20, 2004. The Principal Investigator is Dr. Brad Cenko (NASA-GSFC). 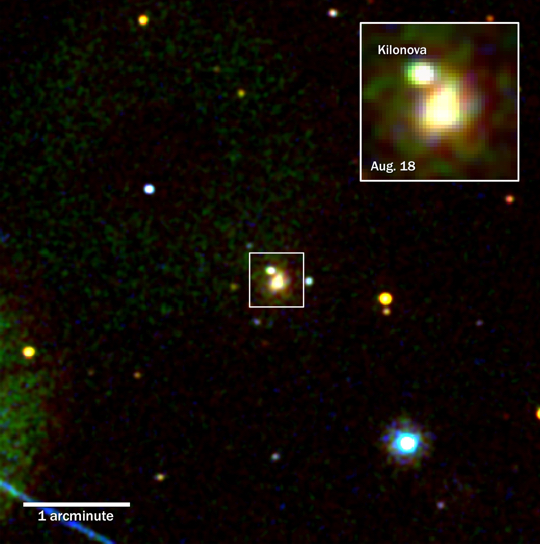 On 2017 October 16th, the advanced LIGO and Virgo gravitational wave observatories announced the discovery of a new type of gravitational wave signal, likely caused by the collision of two neutron stars. The gravitational wave event occurred on 2017 August 17th, and was accompanied by a gamma-ray burst of short duration. Astronomers across the world began searching for the precise location of this event, quickly tracking it down to the nearby galaxy NGC 4993. Once pin-pointed, the Swift satellite quickly maneuvered to look at the object with its X-ray and UV/optical telescopes. The spacecraft saw no X-rays - a surprise for an event that produced higher-energy gamma rays. Instead, it found a bright and quickly fading flash of ultraviolet (UV) light. This bright UV signal was unexpected and revealed unprecedented details about the aftermath of the collision. The short-lived UV pulse likely came from material blown away by the short-lived disk of debris that powered the gamma-ray burst. The rapid fading of the UV signal suggests that this outflow was expanding with a velocity close to a tenth of the speed of light. The results of the Swift observations were published today on the journal Science. The discovery of this powerful wind was only possible using light, which is why combining gravitational waves and light in what we call 'multi-messenger astronomy' is so important. Credit: NASA/Swift

All systems are operating normally.

On April 28, a supermagnetized stellar remnant known as a magnetar blasted out a simultaneous mix of X-ray and radio signals never observed before. The flare-up included the first fast radio burst (FRB) ever seen from within our Milky Way galaxy and shows that magnetars can produce these mysterious and powerful radio blasts previously only seen in other galaxies.
+ Read More

Astronomers have used NASA's telescopes, including the Neil Gehrels Swift observatory, to observe one of the largest black hole known, named OJ 287. OJ287 is a blazar hosting a black hole with the mass 18 billion times that of the Sun, and orbited by a smaller companion black hole, "only'' 150 million times more massive than the Sun. The pair of black holes has been monitored since late 2015 with NASA's Swift satellite and in a recently published paper a team of astronomers report a flash of ultraviolet and X-ray radiation. These observations provides a unique laboratory to study black hole feeding, jet formation, and general relativity.
+ Read More

On Nov. 20, 2004, NASA's Neil Gehrels Swift Observatory took to the skies aboard a Delta 7320 rocket and entered orbit around Earth. The satellite was on the hunt to uncover the mystery of gamma-ray bursts, the universe's most powerful explosions.
+ Read More

If you're a Swift Team member looking for the Team site, try: