Swift observes approximately one hundred GRBs per year, producing positions, light curves, and, in some cases, redshift distances. Under our data distribution policy of Everything to Everyone any observer using any instrument can immediately make follow-up observations based on Swift data as soon as it is ready (within seconds of the GRB for arcminute positions, minutes for arc-second positions, hours for redshifts). Members of the Swift follow-up team have access to the following instruments, but more observatories are always welcome.

The types of follow-up observations made typically depend on the questions of interest, and on the properties of the GRB measured by Swift. Swift will produce so many GRB measurements that most will not be followed up from the ground, due to the lack of available observing time. After the first few dozen intensively studied GRBs, observing plans probably will concentrate on bursts with specific properties to answer specific questions. Population studies will probably be based on the uniform measurements of positions, spectra, light curves, and distances that Swift provides. 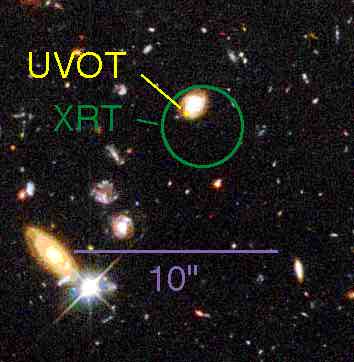 The UVOT precisely locates GRBs to sub-arcsecond accuracy. Leisurely follow-up studies, based on existing surveys or on observations scheduled some time later, can use these positions to determine the relationship between GRBs and affiliated galaxies. Even at the limits of the Hubble Deep Field, the UVOT positions can locate where in the structure of a host galaxy a GRB arises. These positions can be use to distinguish between different GRB progenitor models. For example, hypernovae (very massive brief-lived collapsing stars that produce long-duration GRBs) will be found mostly in star-forming regions, while merging neutron star binaries (which produce short-duration GRBs) are expected to be produced with high velocities and to last long enough to get far from their galaxy of birth before coalescing. Both of these scenarios may produce GRBs, and if short GRBs are found at large distances from galaxies while long bursts are found in spiral arms, then that could indicate that these different classes of GRBs come from these two different mechanisms. 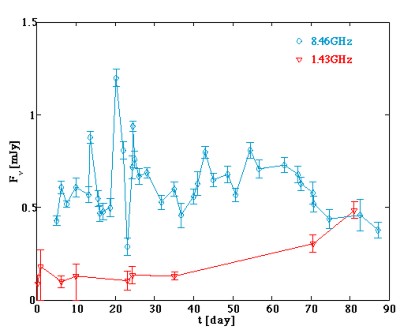 Radio observations are thought to measure the interaction of the GRB fireball with the surrounding material. This can tell us about the environment of the GRB and (if the surrounding material was originally blown out as wind from the GRB progenitor) the evolution of the source in the stages before it became a GRB. The presence of interstellar scintillation in the radio signal provides a measurement of the source size, which tells how the fireball expands in its late (non-relativistic) phases.

Swift notifies observers of high-redshift GRBs with bright afterglows, which provide the best back lights to illuminate z > 4 Ly-α forest. From Songalia & Cowlie (1996).

When Swift detects a bright optical afterglow with a large redshift, this provides an opportunity to study the "Lyman-alpha forest". This is the set of absorption lines that are produced when light from distant objects passes through clouds of neutral gas on its way to Earth. The redshift and thickness of each individual cloud can be measured by examining the absorption lines it cuts out of the source's continuum spectrum. GRB afterglows provide bright, if temporary, back lights to illuminate the forest, allowing more detailed measurements than dim distant quasars. These measurements of primordial gas clouds are valuable clues to the structure and evolution of the Universe.