Notes for observing with the UVOT UV Grism

The UVOT UV grism can provide 1700 - 2900 Å spectra of modest S/N and spectral resolution R ~ 150 for stars in the magnitude range 11-15. The UV grism spectrum actually extends longward of 2900 Å but these longer wavelength regions can be confused by overlap from UV second-order light. Note that the V grism is sensitive down to 2800 Å, and is actually more sensitive than the UV grism for the longest wavelength UV light (2900 -3200 Å).

The wavelength calibration of the UV grism has been difficult because the spectra show a curvature and sensitivity that varies with detector position. Because the UVOT pointing is only repeatable to within a few arcseconds (even with a slew in place), there are variations even within consecutive calibration exposures. These variations are minimized by placing the target in the lower half of the detector, but such offsets are not possible if simultaneous XRT spectra are desired.

The following decisions need to be made when observing with the UV grism:

The effective area for all four grism modes is plotted below. Note that although the UV grism can record a visible spectrum, the sensitivity is less than half that of the V grism, and can suffer significant contamination from second-order UV light. 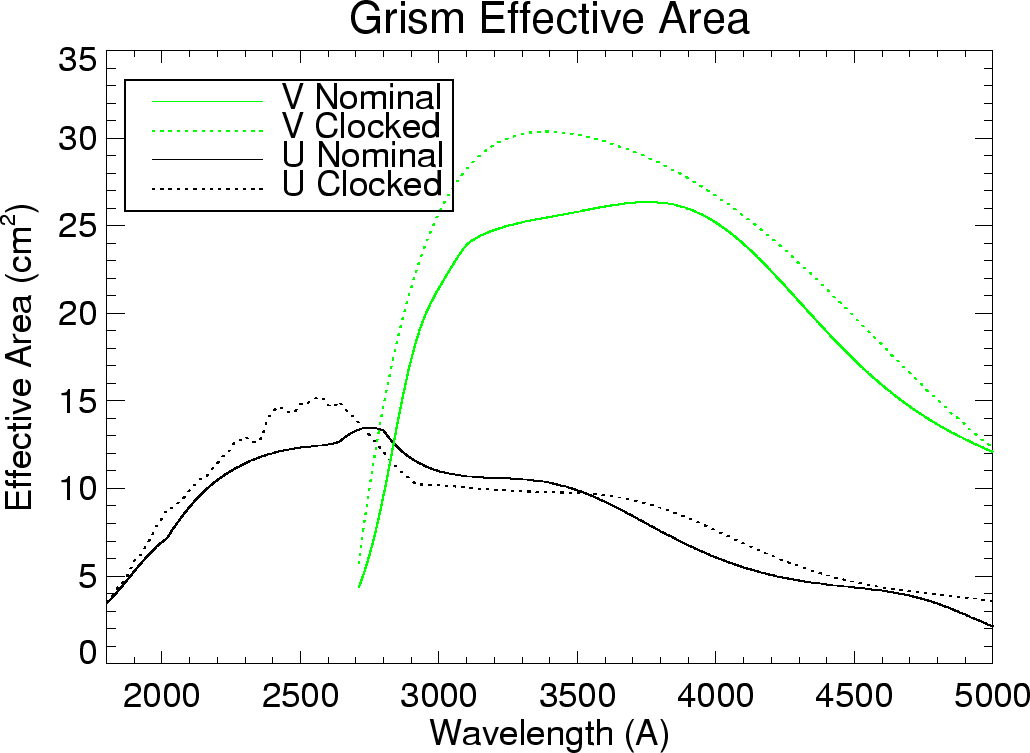 Some considerations to be aware of when using the UV grism.

Three examples of UVOT UV grism spectra are shown below. Figure 1 shows RS Oph in outburst (V ~ 9.5) in March 2006. This spectrum shows N III] 1750 Å emission which is at the extreme wavelength limit of the UV grism sensitivity. Figure 2 is a spectrum of comet 3P/Schwassmann-Wachmann obtained in April 2006 showing CS and OH ultraviolet emission lines. Figure 3 shows a UVOT spectrum of the 14th magnitude calibration white dwarf WD0 320-539 compared with an HST spectrum (in green). For this hot source, the second-order UV light is already present at 2850 Å, as seen in the excess flux compared to the HST spectrum. 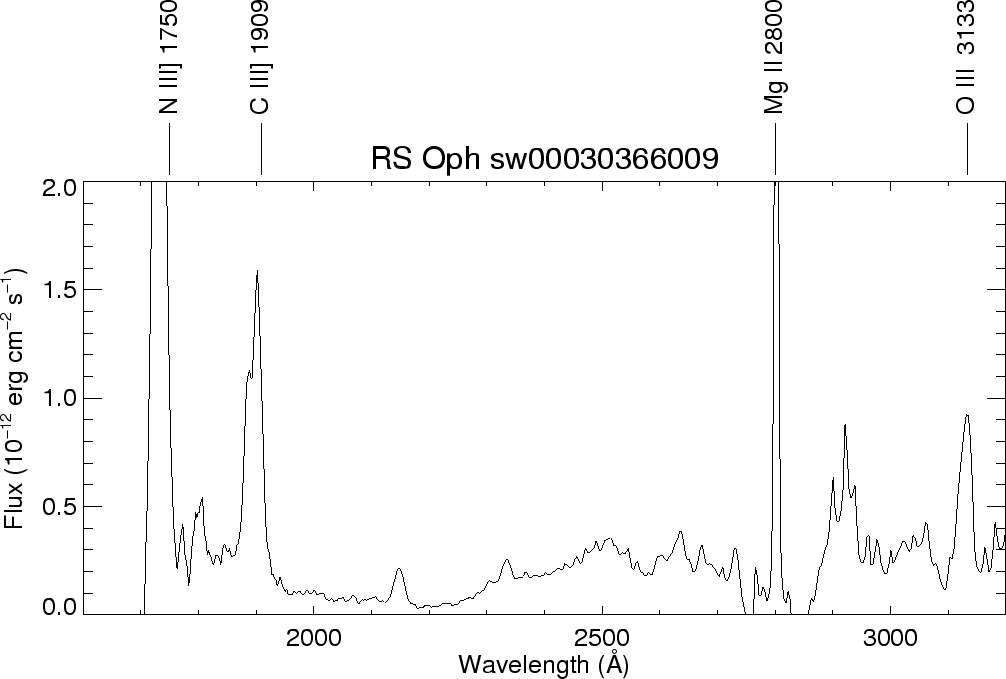 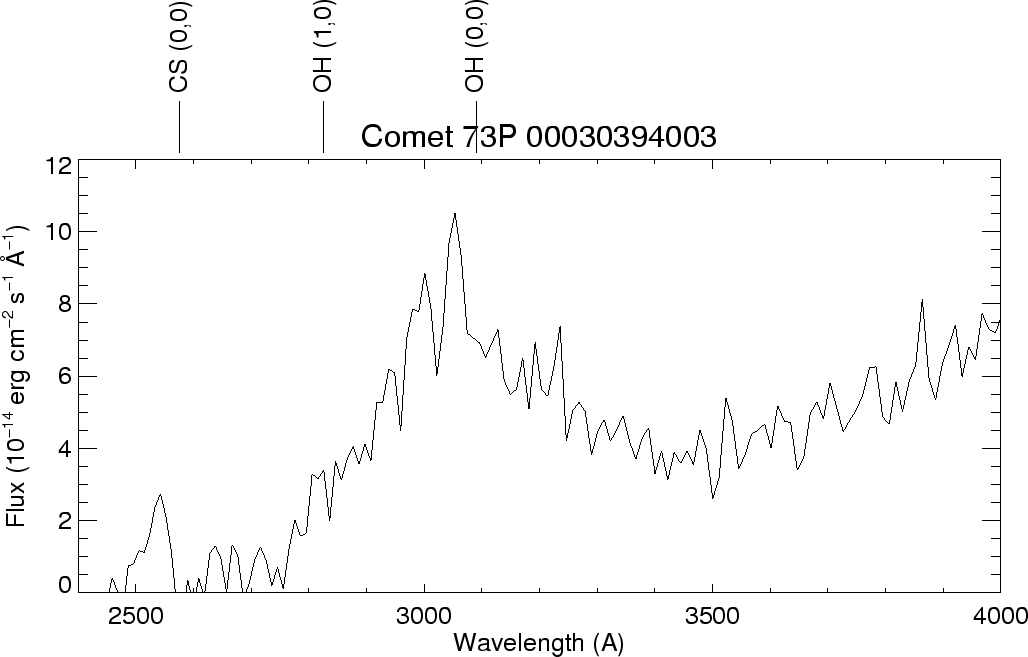 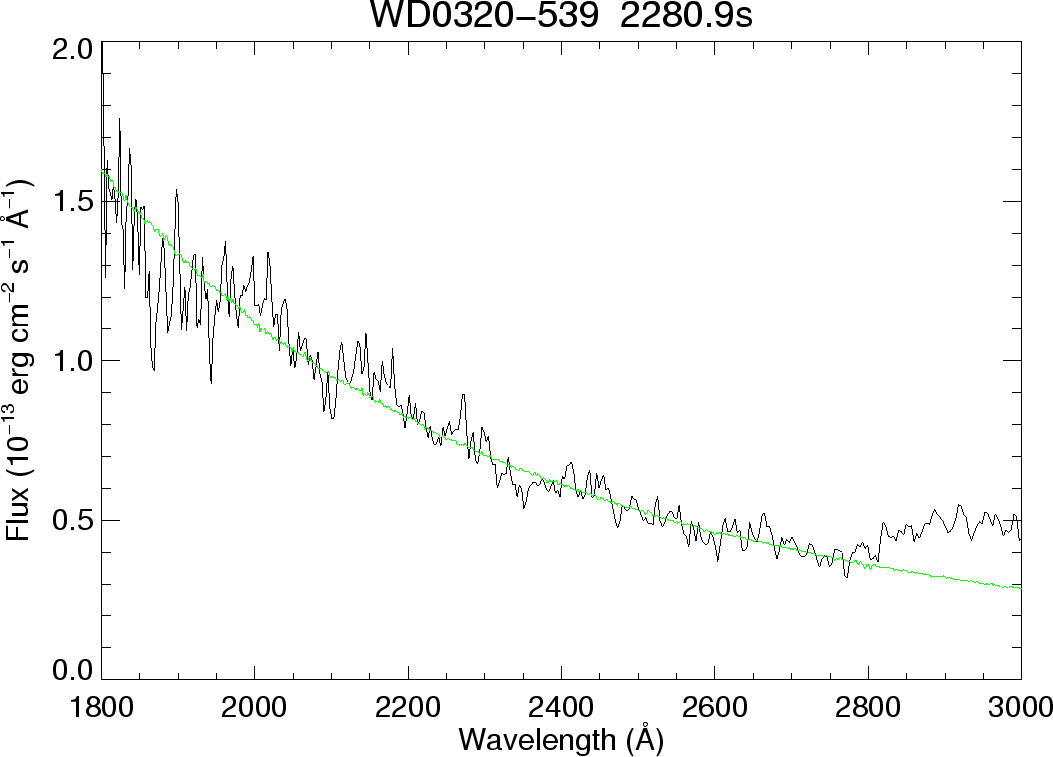