Notes for Observing with the UVOT V Grism

The UVOT UV grism can provide 2800 - 5200 Å spectra of modest S/N and spectral resolution R ~ 75 for stars in the magnitude range 13-17. The V grism spectrum actually extends longward of 5200 Å but these longer wavelength regions can be confused by overlap from second-order light. Note that the V grism is more sensitive than the UV grism for the longest wavelength UV light (2900 -3200 Å).

The following decisions need to be made when observing with the V grism:

The effective area for all four grism modes is plotted below. Note that although the UV grism can record a visible spectrum, the sensitivity is less than half that of the V grism, and can suffer siginificant contamination from second-order UV light.

Some considerations to be aware of when using the UV grism.

Four examples of UVOT V grism spectra are shown below. The first shows a UVOT spectrum of NGC 5548 compared with a HST/FOS near-UV spectrum, and optical spectrsphotometry from Kennicutt. The second compares the V=13.8 hot white dwarf GD 50 with combined optical spectrophotometry and IUE observations. (Note that the IUE spectrum does not appear to smoothly connect with the optical spectrophotometry at 3200 Å.) The third examples compares a UVOT spectrums of the hot white dwarf BPM 16274 with a model atmosphere. The last spectrum compares UVOT spectra of the V=13.7 solar analog P177D with a STIS spectrum. 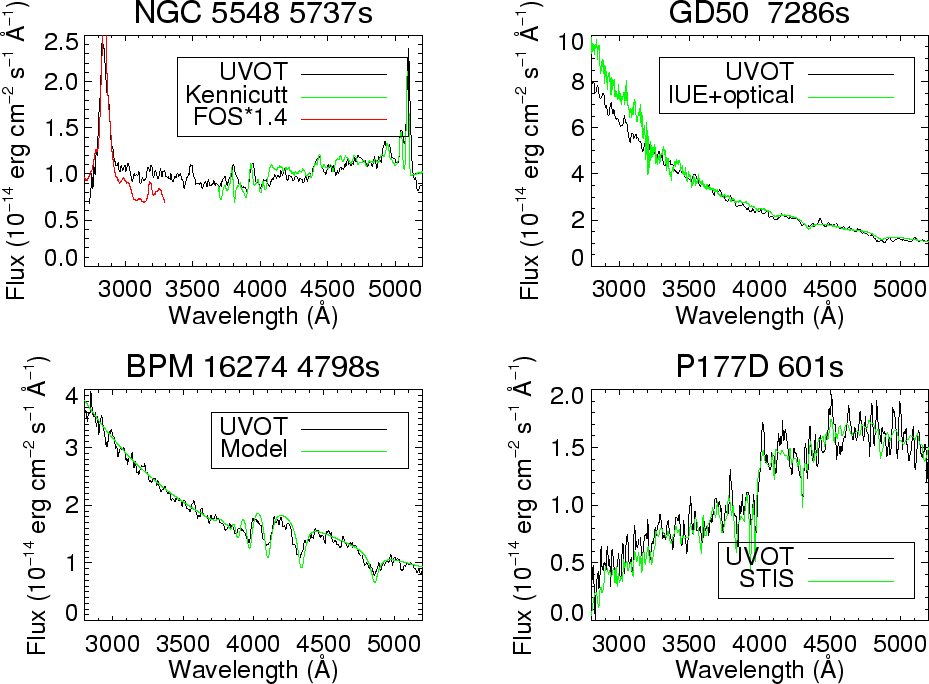