The Swift science data are organized in two main data sets: by observations, where an observation contains data from all three instruments, and by TDRSS messages, which can contain data from both valid and false triggers. These two data sets are stored in separate directories named /obs (containing the observations) and /tdrss (containing the TDRSS messages). Data in each of the two main directories are further subdivided into one month interval and, within each interval, by observation id or sequence number. The month interval directories are named YYYY_NN, where YYYY is the year and NN is the numeric value for the month. The observation id or sequence number is an 11-digit number made up of the target id or trigger number (first 8-digits) and the observation segment (last 3-digits). The archive structure for the science data is therefore:

A Swift observation is defined as a collection of snapshots, where a snapshot is defined as the time interval spent continuously observing the same sky position. Because of observing constraints, the length of a snapshot can be shorter than a single orbit and it can be interrupted because the satellite points to a different direction in the sky or because the time allocated to that observation ends. 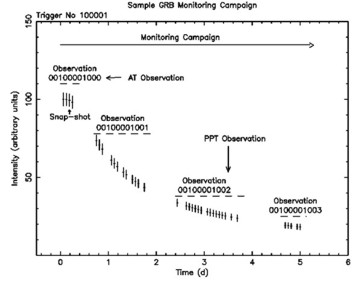 The figure above shows the typical Swift observing strategy for a Gamma Ray Burst (GRB) and/or afterglow, which consists of a series of observations aimed at following the GRB and its afterglow evolution. This strategy is achieved with two different types of observation: Automatic Target (AT), initiated automatically on board soon after an event is triggered by the BAT, and Pre-Planned Target (PPT) , planned from the ground once the trigger is known. An AT observation is identified by the last 3-digits of the observation id being set to zero, in contrast a PPT observation has the last 3-digits of the observation id different than zero, where 001 identifies the first PPT after the AT for that target, 002 the second PPT, and so on.

At the HEASARC the Swift archive can be accessed using the web interfaces (see Special Swift archive page or Browse ), the wget protocol, or the download script.