M101 is a bright, face-on, spiral galaxy located in the constellation Ursa Major (containing the Big Dipper), about 15 million light years from Earth. These first light images of the M101 galaxy demonstrate that the UVOT is functioning well in detecting ultraviolet and optical data. The UVOT is now poised on the Swift observatory to add to the limited data now available in optical wavelengths and to capture the first data ever available in ultraviolet wavelengths from an early gamma-ray-burst light curve. 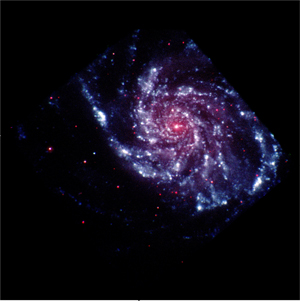 This UVOT image combines both ultraviolet and visible light from a number of filters. Each filter is sensitive to light of a different color, ranging from ultraviolet light beyond the range of human eyesight through the blue to yellow portion of the visible spectrum. This is a 'false-color' image with the shortest wavelength ultraviolet rays being represented as blue, and the longest visible light wavelengths as red. The image shows that hot young stars are being formed in abundance in M101, especially in the spiral arms of the galaxy, where they show up in ultraviolet light. The central regions of the galaxy have more cool, old stars, which appear 'red' in the picture. A number of foreground stars, located in our own Galaxy, also reveal themselves by their red color.
+ High Resolution 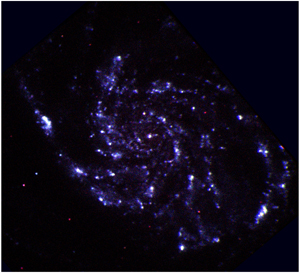 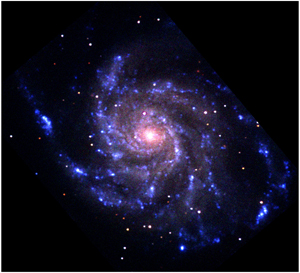 This UVOT image of the pinwheel galaxy M101 is a 'false-color' image generated with the near-UV, the blue, and yellow filters, represented by blue, green, and red, respectively. This image shows more light from the central regions of the galaxy, where older, cooler stars dominate the emission.
+ High Resolution