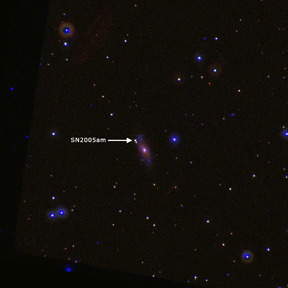 The Swift Ultraviolet/Optical Telescope (UVOT) took this image of the new supernova 2005am on March 3, 2005. The supernova is a Type 1a discovered Feb. 22, approximately one week before peak brightness, and reported in IAUC #8490 by R. Martin, et al. The UVOT image shows the supernova as the brightest point in the surrounding galaxy, NGC 2811. Peter Milne of the University of Arizona initiated the Swift observation, which will yield one of the first sets of detailed spectroscopic observations of a Type 1a supernova in ultraviolet light prior to and during the peak of the supernova brightness. Type 1a supernovae are important in astronomy, since it's believed they always reach the same peak level of brightness. Because of this, the observed peak brightness can indicate the distance to the supernova, in much the same way that a driver at night can tell the how far away another car is by how faint its lights appear.