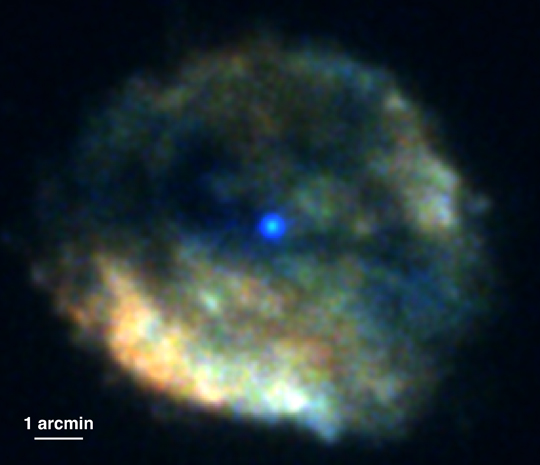 Massive stars, between 10 and 50 times the mass of the Sun, end their lives in a spectacular explosion called a supernova. In a supernova, the external layers of the star are ejected into space at thousands of kilometers per second, leaving a debris field of gas and dust. At the same time, the nucleus of the star collapses under its own weight. The gravitational force is so strong that protons and electrons join into neutrons, reaching unbelievably high densities. In this case, the result is a neutron star, with a mass comparable to that of the Sun but confined within a sphere of only 30 kilometers diameter, the space occupied by a large city. RCW 103 is the result of a supernova that occurred 2,000 years ago about 10,000 light years from Earth. In this new Swift XRT image, the colors of red, green, and blue are mapped to low (0.2-0.9 keV), medium (0.9-1.7 keV), and high-energy (1.7-8.0 keV) X-rays. The blue dot in the center of the RCW 103, presumably where the star was once located, is a neutron star. The peculiarity of the neutron star in RCW 103 is that its emission is pulsed with a period of 6.7 hours, much longer than those observed in other neutron stars, like the radio pulsars. Since a neutron star is expected to spin down as it ages, such a period would require an object several millions years old, in sharp contrast with the age of the supernova remnant. In a new study, a team of scientists used data collected by the Swift satellite between April 2006 and April 2011 to investigate in depth the source timing behavior. They were able to place an upper limit on the rate at which the star spins down. This places tight constraints on the model in the case the star rotation is slowed down by the interaction of the star magnetic field with a debris disk, left from the supernova explosion.

The study, by P. Esposito, R. Turolla, A. De Luca, G. L. Israel, A. Possenti and D. N. Burrows, will soon appear in the Monthly Notices of the Royal Astronomical Society.