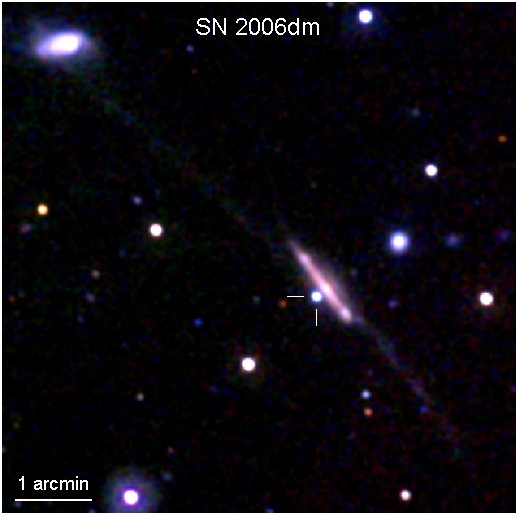 On July 5, 2006, the Swift observatory began observing supernova 2006dm a few days after its explosion. The supernova is the result of the thermonuclear explosion of a white dwarf in the galaxy MCG -01-60-21 which is located some 300 million lightyears from Earth. The galaxy is part of a loose group of galaxies which are gravitationally bound and have passed close to each other in the past. Remnants of such a recent nearby encounter are the faint bridges of stars and gas between the two brightest galaxies of this group, stretching from the upper left to the lower right of the image.

The image was obtained with the Ultraviolet/Optical Telescope (UVOT) onboard Swift in the V, B, and U filters and has been merged from four individual observations obtained between July 5 and 8.