Observations of GRBs have shown that optical afterglows typically decline in brightness as t-1.1 to t-2.1. Therefore, rapid response is required to observe these counterparts and determine their redshift while they are still bright. The UVOT is uniquely suited for afterglow studies. It has ultraviolet capability which is not possible from the ground, and it cannot be clouded out. It is also much more sensitive than any other quick reaction telescope. UVOT observations enable optimal ground-based observations by providing rapid optical images of the GRB field so that any optical or infrared counterpart can be quickly identified and studied. Stars in the FoV of the UVOT provide an astrometric grid for the GRB field.

Table 1. A basic description of the UVOT specifications.

The UltraViolet and Optical Telescope (UVOT) is a diffraction-limited 30 cm (12" aperture) Ritchey-Chrétien reflector, sensitive to magnitude 22.3 in a 17 minute exposure. Table 1 and Figure 1 describe the basic specifications and layout of the instrument. 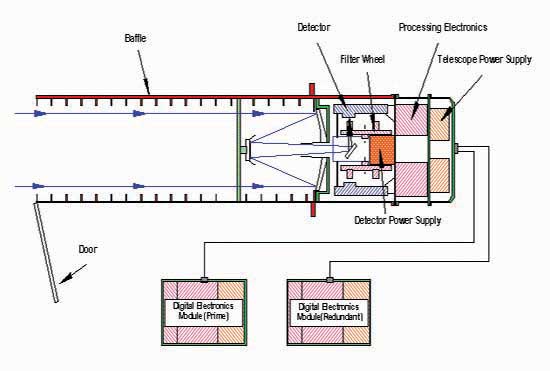 Figure 1. A schematic of the UVOT layout, which is a 30 cm Ritchie-Chrétien telescope. The path of light through the telescope is denoted by arrows. First the light travels through an open door down the baffle until it is redirected into the detector. The long baffle reduces stray light background. The detector sits in front of the detector power supply between two filter wheels. Behind the detector the processing electronics are housed in front of the telescopes power supply, which is connected to two separate Digital Electronics Modules, one prime the other redundant.

Immediately after a GRB is detected and located by the BAT, the spacecraft slews to point both the UVOT and the XRT at the GRB location. The spacecraft's ∼90 second time-to-target means that about 100 GRBs per year (about 1/3 of the total) are observed by the narrow field instruments during the gamma-ray emission.

When a new GRB is acquired by the spacecraft, the UVOT goes through a predetermined program of exposure times and filter combinations. The initial images are immediately sent to the ground for use as a finding chart by ground-based observers, and for comparison to archival observations of the same patch of sky to detect a variable source that could be the optical counterpart. The filtered observations give the temporal behavior as a function of wavelength. If the GRB has a redshift between z ∼ 1.3 and z ∼ 5, the filtered observations can also measure the photometric redshift of the GRB. 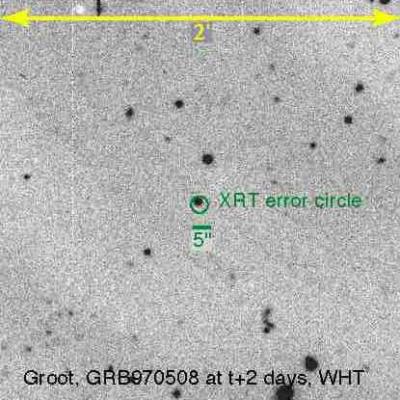 Figure 2. Here is an optical image of a GRB afterglow two days after it went off. This observation was made using a large ground-based telescope (the 4.2 meter William Herschel Telescope, observation by Paul Groot) when the afterglow was around magnitude 20. This image is cropped to 2 arcminutes (compared to 17 arcmin for the UVOT FoV). The size of the 5 arcsecond diameter position determination from the XRT is shown as a green circle. The UVOT will be able to determine the location of any afterglow it sees to an accuracy of ∼0.5 arcsecond.

The UVOT design is illustrated in Figure 1. It is a 30 cm diameter modified Ritchey-Chrétien telescope with an f/2.0 primary that is re-imaged to f/13 by the secondary. This results in pixels that are 0.502 arcsec over its 17 arcmin square FoV. The filter wheel includes a 4-times magnifier that results in 0.13 arcsec pixels for near diffraction limited imaging. The optics used for Swift/UVOT are the flight spares from the XMM-Newton/Optical Monitor (OM). The telescope structure, baffle, and thermal designs are also from the XMM-Newton project.

The detectors are copies of two micro-channel plate intensified CCD (MIC) detectors from the XMM-Newton/OM design. They are photon counting devices capable of detecting very low signal levels, allowing the UVOT to detect faint objects over 170-650 nm. The design is able to operate in a photon counting mode, unaffected by CCD read noise and cosmic ray events on the CCD. The UVOT can autonomously determine the spacecraft drift using guide stars in the FOV. The UVOT design includes the XMM-Newton/OM 11 position filter wheel in front of the detectors. The two grisms can be used to obtain low resolution spectra of bursts brighter than approximately mb < 15.

Once Swift has slewed to a new burst, the UVOT acquires a 150 s white exposure of the target field. The 2x2 arcmin portion of the frame surrounding the XRT GRB position is compressed and telemetered to the ground within 50 s. The Swift Operations Center automatically posts this image to the GCN. During subsequent ground contacts, the full frame of the finding chart image is telemetered, as well as the observing sequence of image and event data for the suite of imaging and grism filters in the wheel. Images generally contain at least 15 serendipitous stars listed in existing astrometric catalogs, allowing sub-arcsec positioning. Unlike the XMM-Newton/OM, the UVOT autonomously reduces the high-voltage on the MCPs when bright (mB < 10) stars or Earthlight (25° of the limb) are in the FOV. This change removes the XMM-Newton requirement of preplanning UVOT observations. The UVOT can use a fast mode to produce high temporal resolution light curves (11 msec resolution).

The UVOT can detect a mB = 22.3 point source in 1000 s using the open (white) filter. A comparable 30 cm ground-based telescope is limited to 20th mag due to sky brightness and seeing. Given an mB = 22.3 source with a spectrum like an A0 star, the signal-to-noise ratio is ∼3 in 1000 s. Coincidence losses will start to degrade performance at count rates of greater than ∼10 count s-1 pixel-1.

Table 2. UVOT sensitivity limits. The counts are for an AOV star (Vega).

The measured, on-orbit UVOT effective areas are shown below. The UVOT ultraviolet sensitivity is a significant improvement over the XMM-Newton/OM sensitivity. Second-order structure in the curves are governed by cubic spline interpolation over a small number of provided data points.

Notes for observing with the UVOT visual Grism.

Notes for observing with the UVOT UV Grism.

Further detail on the development and performance of the UVOT is available from the instrument teams: